Prescription for banter at Half Marathon Champs

We follow a group of seven medical professionals from Tasmania who competed on the Sunny Coast.
Start reading
Event Recap
August 9, 2019

The sunshine and Tasmania don’t generally bode that well together in winter...

For a group of seven Tassie Athletes however, the previous weekend proved to be an exception.

The Sunshine Coast, Queensland, played host to the 2019 Australian Marathon and Half Marathon Championships - a title most of our group would never fathom entering.

However having bitten the bullet, it crossed our minds that we should probably start training - a decision that resulted in an influx of Garmin and Nike sales and subsequent soft tissue injuries.

This idea to enter and run a half marathon event stemmed from a group of medical professionals who all hail from Tasmania.

We would regularly beat the sunrise to meet at 5.30am in the idle and quiet location of Cornelian Bay on the banks of the Derwent River in Hobart.

The run was initially intended to be a release from the often hectic work schedule - to talk banter and collect our thoughts before diving back into our respective roles within the hospital environment.

What often ensued however was a fourty-five minute slog full of unpredicatable surges, often initiated by Nat ‘Hurt-locker’ Jackson.

What initially starting as a casual jog as a group led to twelve weeks of increasing fitness, 10km personal bests and plenty of trash talk at work.

Suddenly we got the urge to take things to the next level and conceived the idea to use the runs to train and prepare for an actual race.

We eyed off the Sunshine Coast marathon running festival as the ideal opportunity.

Given we all hail from Tasmania, the opportunity to escape the cold winter winds for 20+ degree temperatures was an alluring thought, let alone to be able to do it with a good group of friends.

In hindsight, our experience at the championships over the past weekend delivered exactly this.

The athletes touched down in Queensland on staggering flights from different parts of the country, starting with George ‘Busted Sav’ Miller who was surprisingly injury-free yet tired from his fatherly duties; he's a great dad to two kids while managing his position as a Plastic Surgery Registrar.

The dynamic doctor duo of Sam Hamilton and Kat Davis also seemed to arrive well rested, hungry for some sunshine and eager to test themselves over the longer distance.

Hosts for the weekend, Nat and Em Jackson, had been acclimatising to the race weather for six months now and were excited to have friends join them at their humble abode.

Finally, coming from down south was Hobart’s most well-kept man and Anaesthetist, Jack Madden, and myself - a Perioperative Nurse; both well caffeinated and eager to pit our own training against the others.

Following some unreal hospitality, the race day was finally upon us.

As the sun begun to touch Australia’s eastern seaboard on race day, the house gradually awoke to the rich smell of coffee and the subtle tunes of Nat’s Spotify.

After a few pre-race photos and a surprisingly tension free walk to the race start, we all entered the ‘zone’ and situated ourselves among the sea of runners.

Strava tragic and Nike 4% shoe wearer George set the pace early - however it was Nat who covered the second kilometre in 3-minutes and 40-seconds to latch onto George and set the early pace.

Despite the medical background we all share, Nat was coming off a self-diagnosed calf injury and enjoyed a two week taper leading into the race; a tactic that in hindsight seemed to have paid dividends.

Sam and I enjoyed a comfortable first three kilometres together before he found his pace and pushed forward.

Much the same as any doctor in 2019, Katherine's ears were fitted with Apple AirPods as she used the music to find her groove.

Like a good story unfolding, the turn around at the half way mark saw all five men within two minutes of each other.

Hand slaps and high fives were obligatory - but nostalgic thoughts of each others Strava running and banter emerged and ensured the battle was on.

Jack's previous marathon experience proved beneficial over the final 10km, where he clocked a faster back half compared with his earlier running.

However Nat’s lead was too significant, as he won the race of our group ahead of Jack - who managed to hunt George down in the final kilometre.

Unfortunately, I couldn’t hang onto Jack in the closing stages of the race, and with him being 10 years my senior, it's left me questioning my running career moving forward.

Sam’s early pace proved detrimental to his run, however as confessed by Sam himself, a total of 58.5km in the month before the race still signifies a solid effort.

In typical Kat style, she crossed the line smiling and content with her race, averaging a blistering 5:10 minute per kilometre - elite running.

Em competed in the ten-kilometre event later that morning, and contrary to her husband's thoughts that she had fainted after not reaching the finishing line in her desired time, she was all smiles, having held her standard Strava run pace of 4:27 min/km.

The run provided the perfect environment to challenge ourselves, get some vitamin D - and instil confidence in Nat that he can still run and not do a calf injury.

Until the next race opportunity arises, these Tassie Athletes will be back out pounding the pavement, chasing Strava segments and enjoying life along the way.

*despite being Strava tragic's, this run is in no way sponsored by Strava, but if you're after someone to follow along with you can connect with me here. 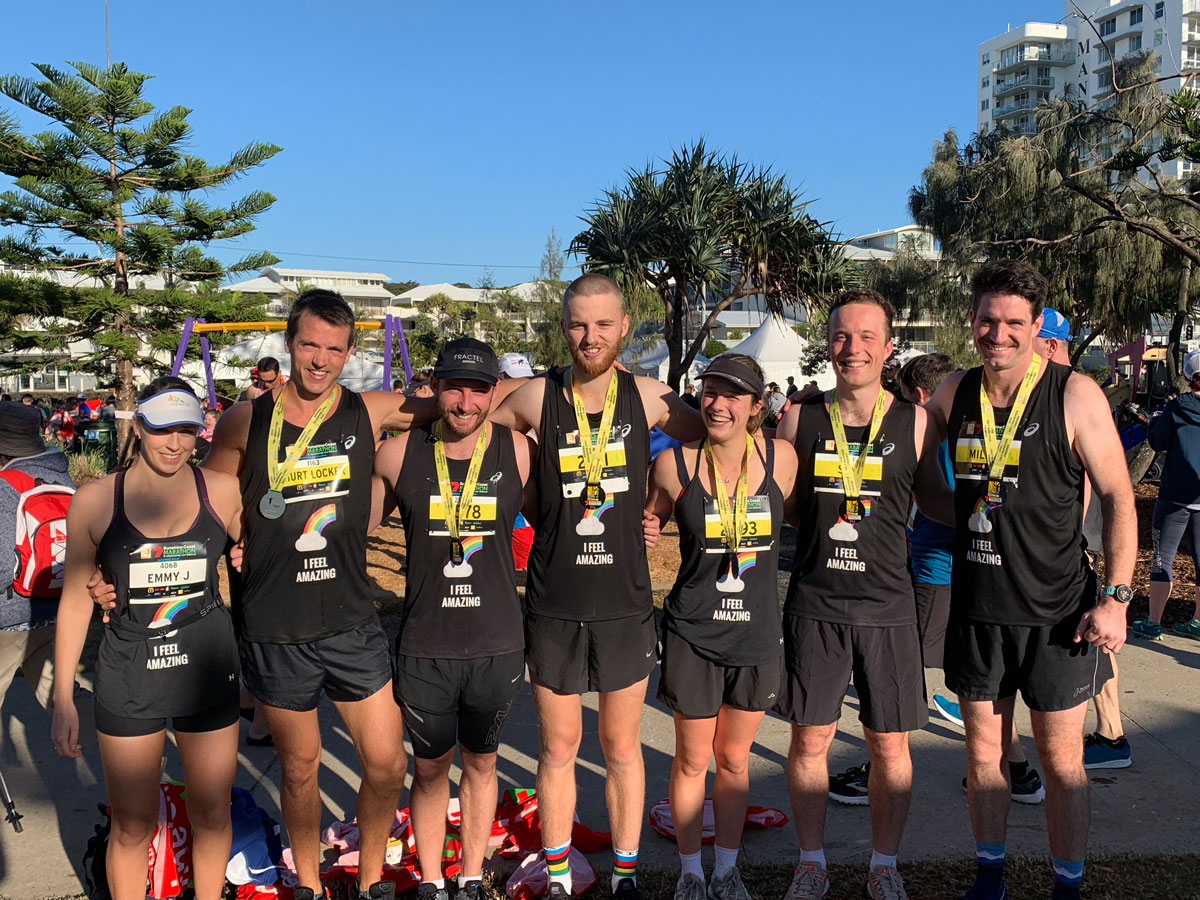