Sarah Haywood
While individual, each arrow contributes to the overall performance for Tasmanian archer Sarah Haywood. In her Tassie Athlete article we share her passion for the sport, love for home and how all athletes can make every shot count.
READ POST
July 25, 2020
Words by
Dominic Anastasio
Media by
by Dominic Anastasio
This article supported by
Domin8 Designs

As we walk down the range, Tasmanian archery athlete Sarah Haywood advises me that I'll be safe behind ’the blind’.

Moments later, having built up the courage to poke my head out from behind the triangle-shaped box, I hear one of her arrows sting past before I can even spot it.

I knew this was going to be a fun article...

Before meeting Sarah, Andy and myself had been fortunate to personally know each of the Tassie Athletes, so I was intrigued where our discussion would go and what insight she may be able to share into a sport I knew little about.

In this article, we catch up with the 2018 Australian Open Archery Champion who reflects on how she got into the sport, some of the challenges of being a female athlete, and how proud she is to call Tasmania home.

As with all Tassie Athlete articles, we also delve into a theme behind Sarah’s approach.

In this instance, we discuss the importance each individual arrow has its place, making up the collective; and how athletes from any sport can use this notion in their competition and training.

Perched at Lauderdale’s Hobart Archers range, Sarah begins by telling about me her journey into archery - a story that started in her own backyard...

"I was always interested in archery as a kid,” she says, "there was just something that always fascinated me."

“I actually made my first bow and arrow out of gumtree and a shoelace that I found in the backyard. I used to run about the place shooting hay bales as my targets."

“Things really beguan though in 2012 when my dad brought me to the archery range here at Lauderdale for a come and try day and, well, the rest is history.”

When asked what it is about archery that Sarah loves, she leans back in excitement and I can instantly see the passion in her eyes.

“I just think it’s the most amazing feeling when you shoot the perfect shot.”

“When you see that arrow land in the middle of the circle, in that ten area, there’s really no better feeling."

To my naive eye, archery seems relatively straight forward - get as many arrows in the middle of the target - however having witnessed Sarah send a handful of arrows down the range earlier, I knew there was much more to the sport.

Standing behind the shot line, gentle breeze blowing, Sarah tinkers with her bow before drawing an arrow and contemplating the array of factors in front of her.

“I think my own shot process is a great place to start,” Sarah says when asked to conjure a sixty -second overview of archery.

"I have my bow in my hand and then I focus on the target."

"I take pressure in the string and concentrate all my energy and flow into where I want the arrow to hit.”

“But,” she pauses, “this may not always be the middle of the target... it may be really windy and I want to shoot the arrow into the ten, but actually have to aim all the way out into the four."

"With each shot I take into consideration where I want the arrow to hit, then 'draw up', become happy with the aiming spot and then expand and release, letting the arrow go for it.”

“Hopefully, I've done the right thing and the arrow goes in the middle - that’s ultimately what you’re looking for, most of the arrows in the ten."

“Wind is the biggest factor for archery, as it can impact the flight of your arrow incredibly depending on the strength and direction, but also the sun can change what's known as 'the string picture'.”

“It’s quite complex, but when looking at the string and lining it up with your bow, the sun can make a shadow that is constantly changing; so you really have to concentrate and line the arrow up each time.”

It's an approach that seems to be working for Sarah, with just some of her results including:

Despite some downtime during COVID-19, it hasn't deterred her from identifying big goals for her future; with eyes on acceptance into Archery Australia's Paris Pathway Program and ultimately the Paris 2024 Olympic.

"I missed out on the Tokyo Olympic trials selection by a very slim margin, so I have a lot to prove to myself," Sarah says.

Under the radar expectations

Despite the sunny conditions and COVID restrictions recently being lifted, there aren’t too many people out here on the range. Sarah is often the only female that uses the range regularly, however, this is something she is more than okay with.

As we chat about archery being somewhat of an under -appreciated sport, Sarah says this is also compounded by there not being a lot of females in the state that competes.

“Thinking about it, being a female athlete in archery - a sport that doesn’t get a lot of recognition - it is pretty difficult.”

“Particularly at the level that I’m trying to achieve, there’s a much, much bigger focus on the boys, which is rightly so in a way.”

“For them, there’s such a high chance they’re going to be Olympic medalists - or some already are - whereas with us in the female events, it’s really tough to prove yourself."

“In saying this though, I really do feel like that's an advantage in a way."

"It means that in training or in competition, your limits are set by your own expectations - so you can go out there and perform incredibly well and take everyone by surprise.”

“I want the best out of myself in every aspect of the sport, but being that under-the-radar person in Tasmania and as a whole sport, I think it makes me, and others, really appreciate success when you do achieve it."

A common theme that pops up in both our Tassie Athlete and training diary articles is that ‘under-the-radar’ and ’Tasmania’ often go hand and hand.

In particular, I think back to Will Rogers statements in our “Tassie’s Strongest” piece where he believes one of our strongest qualities is our ability to work quietly, hop across the ditch, 'achieve success', then return home.

With this in mind, I’m interested in what it means to Sarah to be a Tassie Athlete... 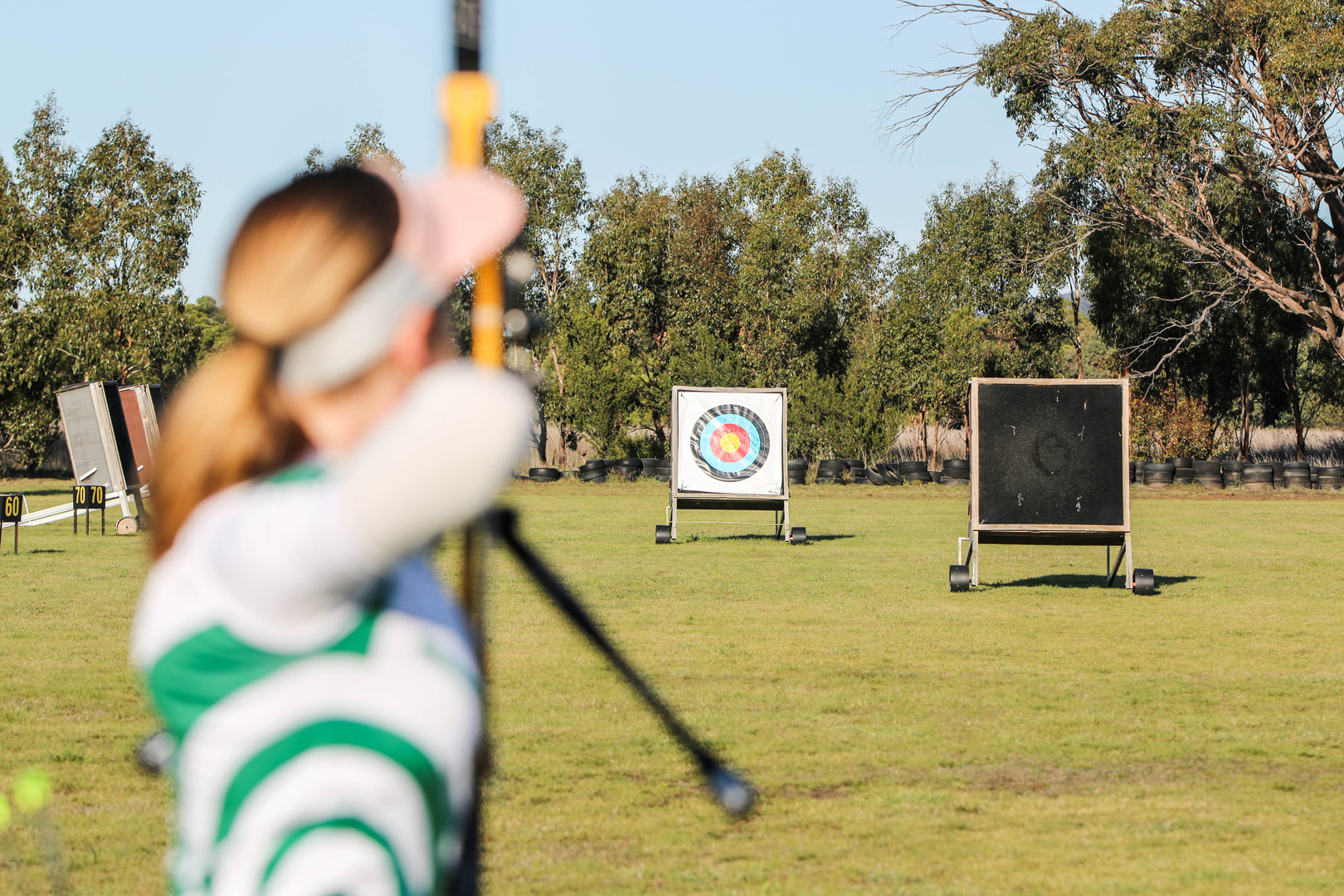 A love for home

"Being an athlete in Tassie means an incredible amount to me, particularly thinking about my sport."

“There’s this expectation in archery that you 'have to' move to Brisbane to be successful, which isn’t necessarily the case.”

“I’m very happy competing down here with myself, by myself, and then going to nationals where I'm on that exact same playing field… sometimes, I'm even the athlete that is winning.”

"When thinking about that, it does make me proud to be a Tassie Athlete."

On that notion of the Tassie Athlete, Sarah and I discuss some more in’s and out’s of archery before getting to the key aspect of each article, what takeaway she thinks other athletes may benefit from.

“That’s a really tough question because I feel that it’s normally me learning from others, particularly having read the Tassie Athlete articles and seeing how other athletes in Tasmania approach their sport.”

“If there was something though, I think it’s the idea of how the sum of your work makes up the whole.”

“Someone like a sprint hurdler and an archer, as an example, they’re very different but also similar...”

“As an archery athlete, each arrow that we shoot is really well considered and completely individual of the last shot - or in particular the next one.”

“My entire concentration is in this arrow, but I also need to put aside what may have happened with the last one - because this is the arrow that matters now.”

“Back to the hurdler, it’s not like they need to consider each individual hurdle, but it’s the sum of the hurdles and their approach to each of these - much like each arrow - that make up their race and their time, their result, their success.”

"What everyone can take away from archery as a sport is that - this is the moment. We have one arrow, just as a sprinter may have one start or a rower that one stroke; and can work on this aspect to improve our overall performance."

“No matter what sport you do really, there's an approach to archery that you can take and make your own.”

To round off our conversation, I was interested in Sarah's take on the Tassie Athlete from a neutral perspective.

“I think the Tassie Athlete is a fantastic thing and has so much potential, given it is still so young.”

“For me, it has been great to see other athletes in the state are doing so well, as well as giving a bit of insight into what they’re up to."

"At the end of the day we are a small state and while you may not have met one of the other athletes, there’s a high chance you’ve heard of them - so it's comforting to know that they’re experiencing the same things you are."

“I really wanted to get on board because I think it is such a useful platform and can learn some helpful lessons."

"Personally for me, it was comforting to read and view that you don’t have to go interstate to be good at your sport - that there are athletes based here at home achieving the top level of success in their sport."

Having earned her spot as a Tassie Athlete following her very kind words, we head back to the range where Sarah explains to me some of the in-depth technical aspects of her bow and setup.

In case you were wondering, although she offered - I didn’t have a turn with the bow.

While unsure if this was due to the fear of injuring someone around, or more so myself, I am eager to head back down and give it a go; to which Sarah reassures me that anyone is welcome and it’s an incredibly friendly community.

On behalf of the Tassie Athlete, I’d like to thank Sarah and the Hobart Archers community for letting us come down to chat, as we wish her all the best in her upcoming training and competition. 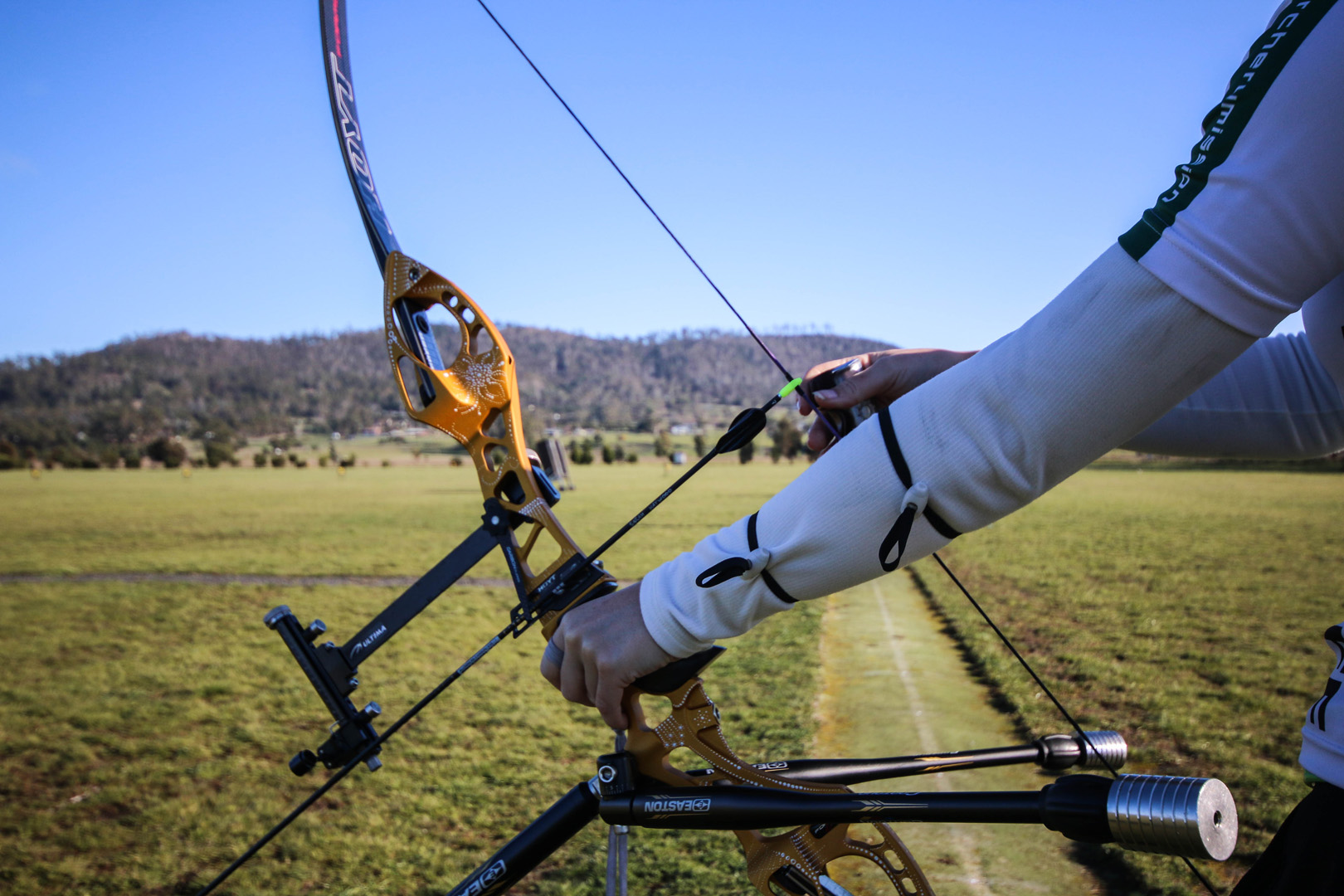 A strong work ethic is often a trait that comes with age. Following a setback in 2019, Tasmanian discus thrower Jackson shares the lessons he has learnt on working hard to achieve his best performances in the throwing cage.

Two Tasmanian brothers demonstrate that a sibling rivalry goes deeper than fighting over the PlayStation, wrestling each other or arguing over who ate the last muffin… it’s much more.