The Benefits Of Being Committed

Samuel Field
The emerging middle distance runner attributes his recent success to being consistent. Here, he shares insight into how to achieve consistency in training, as well as the benefits that carry through to competition.
READ POST
May 1, 2019
Words by
Dominic Anastasio
Media by
Dominic Anastasio
This article supported by
Athletics Tasmania
Domin8 Designs

It was one of the first chances I'd had to chat with the emerging middle distance running talent.

But I was let down.

As with most people these days - Sam’s attention was on his phone.

A quick glance took me by surprise though, as all I saw was a trail of green boxes.

Sam was going through the app called Training Peaks, his digital training diary, where a green box meant a session has been completed as the coach had set.

Despite scrolling through the days, weeks and months; there were no gaps.‍

The most successful season

What struck me with Sam immediately was his ability to pin point exactly where his success came from in the 2018/19 track and field season.

“Somewhere into my break after the 2017/18 season, I made the decision that I really wanted to go for it the next season,” Sam says.

“I’d had a taste of this lifestyle before, but had never fully committed to my running and training. Looking back, it wasn’t a hard decision to make because it was something I’d wanted to do for a while."

“I wasn’t quite sure at the time what this meant, or where to start, but the overall goal was as simple as getting things done and having a balanced, but strict routine.”

“The current season was my best to date. I dropped under the 3-minute 50-second mark in the 1500m for the first time, clocking 3:49.90. I also finished the season winning my heat at the Australian Nationals in the U20 1500m, and coming second in the final.”

“I think overall though, my biggest achievement was ticking boxes in training."

"This meant that I had confidence to be competitive in races, that I could put myself in a spot to win."

“I’ve reflected a bit on the past season, and looking back - I can say that I found these achievements because of consistency.”

I asked Sam this question directly, but had to admit  I was hesitant given the answer is unique to each individual.

He had no hesitation in answering.

“Consistency for me is a repetitive balance based around routine.”

“You’ve got to do everything, whether that’s training, doing gym, recovery, eating right, sleeping well. You’ve got to do it every week, every month - but it’s got to be balanced.”

“I begun by identifying what my main priorities were - school and training, and setting my routine around these."

"There were times when I wouldn’t see much else other than study and running, but I think having set my goal early on, it reminded me why I was doing the things I was.”‍

Fast forwarding to the February 2019, I was behind the camera at the Tasmanian 3,000m Championships in Penguin.

One of the strongest line up of athletes from around the state made their way into formation after the gun went, and after a few early lead changes, the increasing pace narrows the field down to three.

Well, three and Sam Field a few metres back.

I’m lying on the ground on the back straight capturing the final laps, head buried in the lens. 600m to go.

The commentator makes mention of Sam’s closing speed, but not many give him a chance given the slight gap. 400m to go.

I’m rushing to get back to the finish line with the camera, glancing regularly to the back bend where, somehow, Sam’s made his way up to the shoulder of the leaders. 100m.

A slight grit of the teeth is the only sign of fatigue I can spot as Sam crosses the finish line as the 2018/19 Tasmanian 3,000m champion. The photos show how much the run meant to him.

“But, I had a fair idea of my aerobic strength as we’d done a few build up sessions and watching my training partners - so I knew I could be ready for the race with confidence."

“I remember before the race people kept asking what time I wanted to run. I told them I had no clue (I did but, I wouldn’t tell anyone that)."

“My focus for the event was just to race, and see what I could do. I just wanted to be competitive."

“In the end, my time was 8:27 - that uncharted territory - turned out to be one of my best competitions." 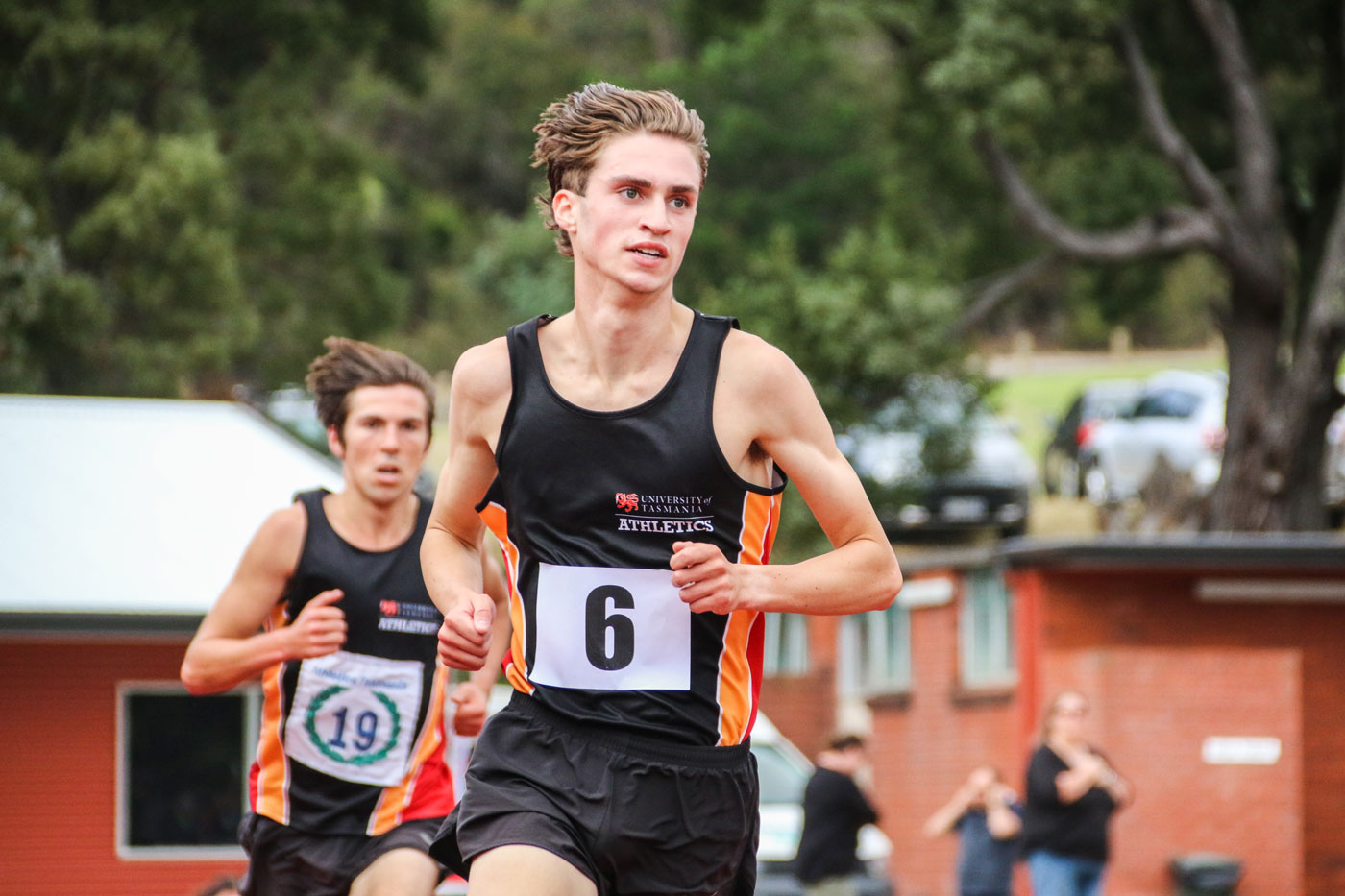 I asked Sam where the journey to consistency and his string of achievements begun.

“My winter training," he says.

“Winter is a quiet time for track athletes, but it’s where most of the work gets done."

“I’d never had a winter like it, but I had my goal and knew what I wanted to achieve."

“I think that consistency is easier to achieve in winter as there aren’t as many interruptions to training."

"I really set myself into a routine that would make it easier to tick the boxes. I was a hermit."

Sam and I head out for a forty-minute jog after our chat, where I start laughing about his term ’the hermit’.

We’re both a couple of weeks into our currently winter base training, and it’s a term that has me excited.

“It was just a silent period, I’d just put my head down and get the work done.”

“It was the winter that I had never had before, but it set up my summer season."

How to achieve consistency

As a track runner myself, I admit to Sam that consistency is probably my biggest weakness over the past few seasons.

So, the question I put forward to him is: "If there were three tips would you could give in order to achieve consistency, what would they be?"

After some thought, he replies:

"I think the first point to find consistency is to define a greater goal."

"This is something that can constantly motivate you, and lets you do things that you may not want to do, like train on those bad days or stretch when you need to."

"You may hate doing your homework - but that greater goal means you can get it done because there's something else you want to achieve."

"For me, I was so motivated this season by the idea of getting the United States for college - this was my goal."

"Every training I did in 2018, I thought of the States. I was obsessed and made sure I put that goal first in the decisions that I made."

Sam also talks about how much building a week around a regular occurrence, something such as school or work, also helps develop a routine.

"My week was built up around school, but this really helped me get used to that day-in, day-out grind of training and life."

"It also helped me figure out what worked and what didn't, all leading towards being more consistency on a daily, weekly and monthly basis consistency."

Flashing back to our summer training on the track, measuring his progress on the Training Peaks app was a great mental reminder for Sam prior to our training run.

Beyond tracking the running sessions completed, he also records how feels and recovers to give not only his coach, but himself, an indication of where things are at.

It looks like this consistency has paid off for Sam...

The benefits of being consistent

"In the near future, I'll be heading to Florida State university to compete in both track and field and cross country as a collegiate athlete."

"I'll also be studying over there for the next four to five years, but I'm really excited to be able to compete against some of the best college athletes in the world."

Sam says for him personally, there were three main benefits to being consistent in the previous season.

"I was really relaxed a lot of the time. I knew that I'd had minimal interruptions over the weeks and months, and this gave me confidence in training and racing."

"I could back myself in because I knew I had the fitness, I knew I was well trained and this carried through".

"I was a fresh as I could be knowing that I'd done the work."

Having latched onto the notion of 'the hermit', I'm excited by the prospect of seeing some of these benefits in my own training and competition in the coming months.

With Sam's focus on getting to the United States soon, I want to thank him for taking the time to chat and share his insight into being consistent.

You can follow along with Sam's journey at @samueljfield. 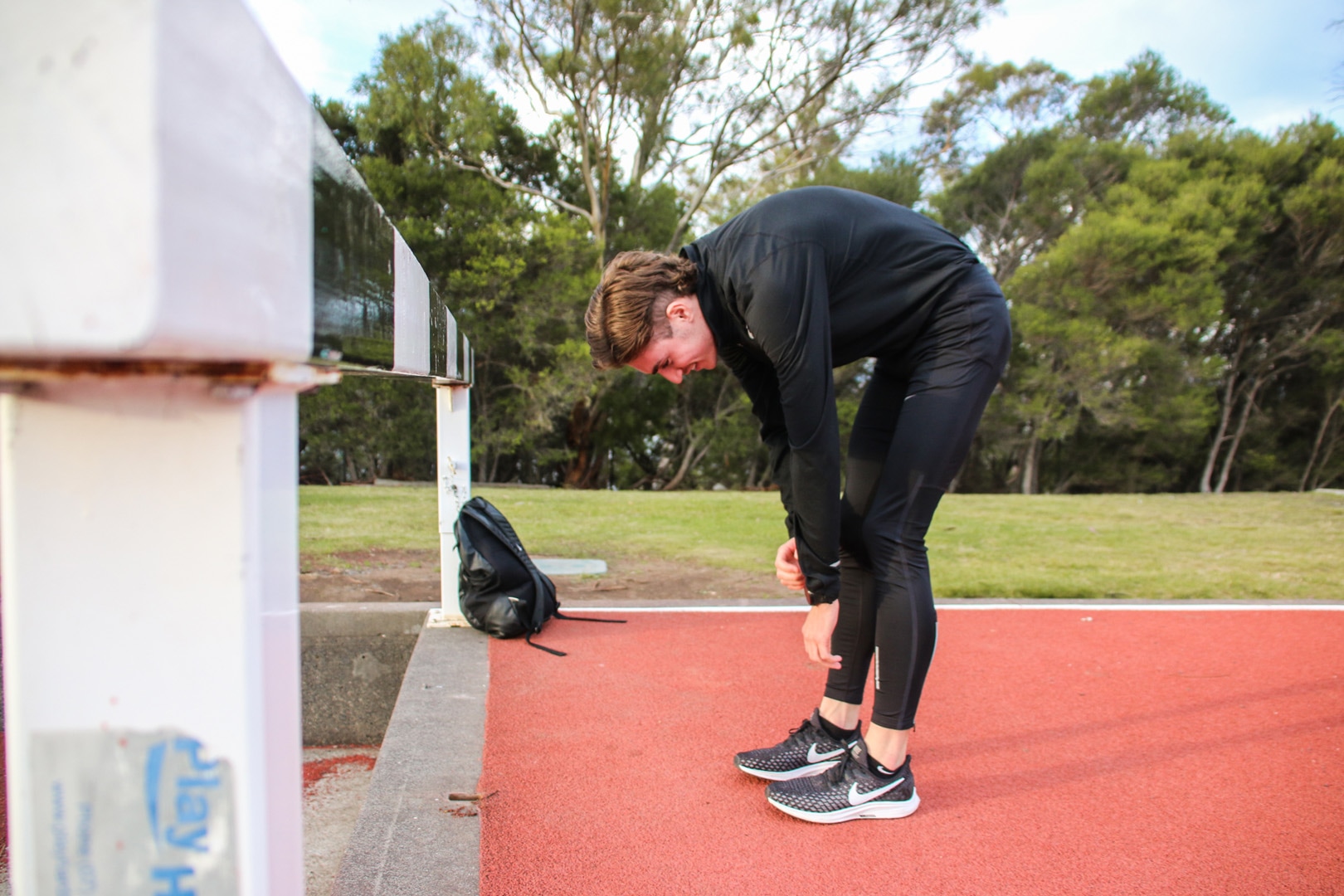 Two Tasmanian brothers demonstrate that a sibling rivalry goes deeper than fighting over the PlayStation, wrestling each other or arguing over who ate the last muffin… it’s much more.

Some describe it as the worst crash they'd seen. Tasmanian mountain biker Izzy Flint shares her experience of concussion following a devastating accident overseas; and the real world implications of brain injury on her life beyond sport.