The Importance Of Perspective

Tightening her cleats by the side of the car, one of the first things Tasmanian cyclist Madeleine Fasnacht says to me is "Hey, what will my voice sound like? I’m pretty sure nobody likes their own voice on camera!"

I get the feeling this ability to laugh at herself is a sign of the honest conversation to come.

I admitted to 'Mads' that I had some inside knowledge prior to asking her to be a part of the Tassie Athlete launch.

Although I knew a bit about the 2017 Australian Junior Cyclist of the Year, I was told that she's incredibly determined and committed - understandably traits required to become one of Tasmania's emerging cyclists.

In this post, Maddy provides some insight into the factors that have lead to her initial success on the bike.

She shares how her ‘secret weapon’  has played a significant role in her initial achievements and what it's taken behind the scenes to get there.

However, she also explains how making these choices came at a cost to her wellbeing - both on and off the bike - and eventually lead to her being hospitalised.

Although still working on the journey of finding balance between life and sport, Maddy reflects on the outcomes these lessons have taught her.

She kindly provides some key points that we as athletes can take away, particularly around how important keeping perspective for success at all levels of sport.

"I grew up in a very sporty family. My dad in particular was really into the multi-sport events, so naturally I just followed in his footsteps and got into both running and triathlon," Maddy says.

"I loved running and the competitive aspect, but unfortunately had to stop because I had a really low bone density that would've prevented me from running at the competitive level I wanted."

"Naturally I fell into another sport and did some testing for cycling, where it was identified as something I might be good at."

Maddy pauses for a moment before laughing in front of the camera, "I guess the rest is history... here I am - still riding my bike!"

Conversations among running and cycling circles often delve into the '40min run versus time on the bike?' debate. Answers often range from 2-4 hours for the same outcome and because of this, I’m always intrigued by the commitment required by cyclists.

"It took a long time for me to fall in love with cycling," Maddy admits. "I thought running was everything, the be all and end all."

"But cycling... cycling has brought a whole new facet of things to my life."

"I've met some amazing people and learnt so much not only about the sport, but also about myself." 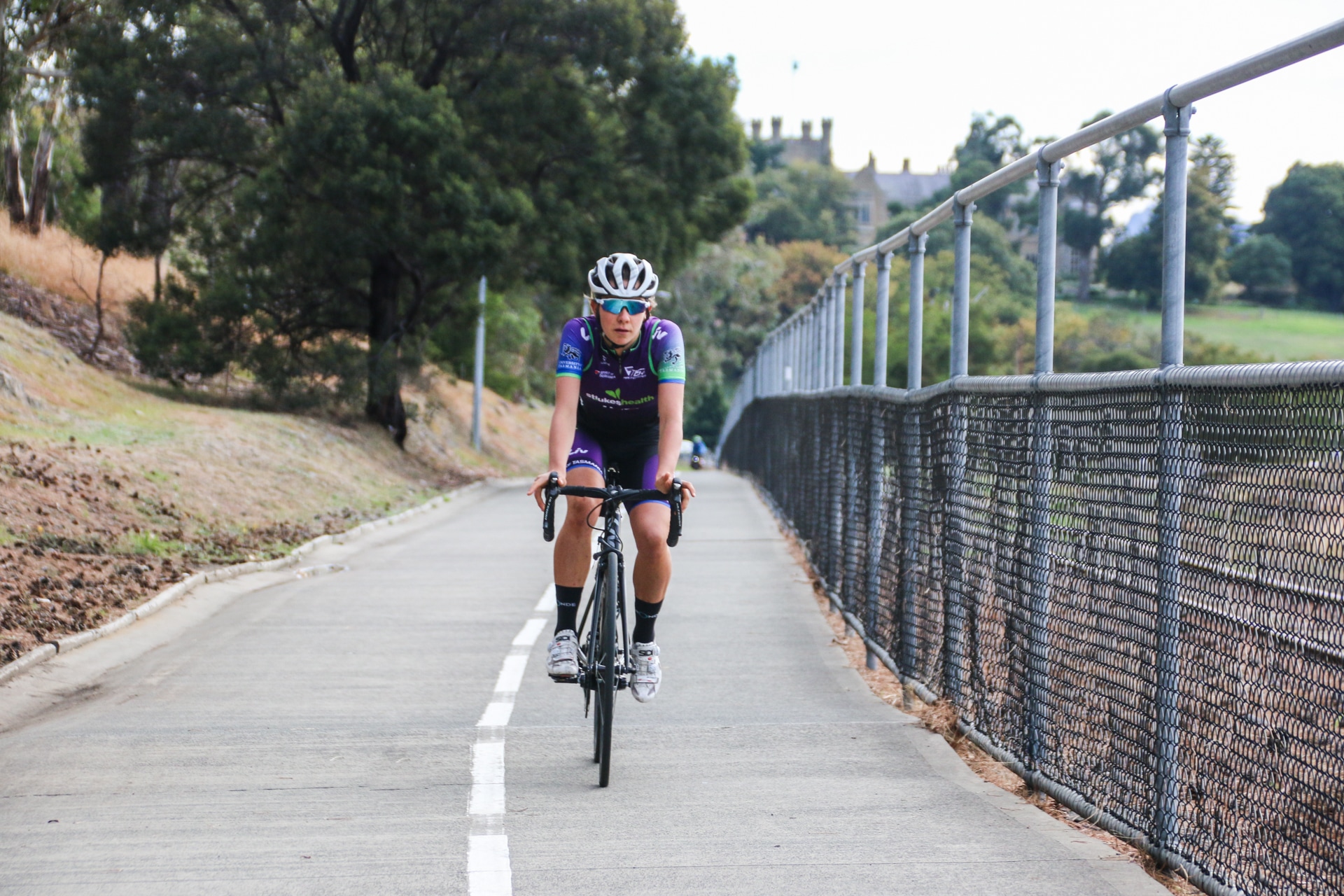 Where does success come from?

Maddy's list of achievements since transitioning to cycling are a testament to her talent and determination.

This influx of results was capped off by being recognised as the 2018 Tasmanian Young Achiever of the Year in sport.

This is the Maddy I'd heard about, and I was intrigued as to exactly what it was that lead to this early success.

"Achieving the things to be where I am now, it didn't come easy."

"There was a lot that went on behind the scenes that those on the outside didn't see, and it has taken a tribe of people and support to help me understand how to manage my cycling."

The thing I appreciate about Maddy is this honesty, both talking about the sport but also herself and her journey.

She's also openly honest when I ask what it was that lead her to such an amount of early success:

"For me, grit and determination is training when you don't want to. It's training when the sun isn't shining, or it's pouring with rain or one-degree."

"It's about facing your fears and having the courage to do that - and that's something that has been big for me."

"I also think grit and determination is about having the guts to be different - to not conform to what everybody else is doing and believe in yourself."

I had to admit, I was inspired.

It makes sense that Maddy's achievements were based on doing those one-percenters we refer to in sport. The aspects of training that aren't seen during competition but are the foundation of high performance. Is being determined the key ingredient to success?

"But...as much as determination and grit - putting all your eggs in one basket - is a secret weapon behind some of my achievements, I can say now that it has also been a detriment."

"For me, things often went to the next level; to the extreme."

"Whilst this was good for my performances, it often affected my overall health and happiness in sport; and in my life all together."

"It was tough because I'd taken running far, sometimes too far, in terms of wanting to be the best I could be."

"It eventually got to the stage where I was hospitalised because of this pursuit, because of the determination; so, it's taken a lot of hard work to manage that with cycling."

Maddy's admission takes me by surprise, as we sit and chat about that experience and what it meant to her.

I ask Maddy where she currently sits along this journey, having gone from one end of the spectrum, to another, to where she is now.

"I know I'm still finding my feet in terms of finding a balance and perspective."

"Fourteen year old Maddy I guess, could only see the next race - and that was often a local meet or something irrelevant. If that meant putting all my eggs in one basket, then I'd do it."

"My friends would agree that I'd give up going to a sleep over or staying up late because I had a school cross country or a club event the next day," she says while laughing, thinking with hindsight at what that means now."

"I think looking back I can appreciate how fun that sleep over would've been. I know now that there's bigger eggs to fry - that you need balance. I've got a different perspective on sport."

"To be a good athlete, you have to learn to be happy and healthy and fit; really, it's about balance but making sure that you're looking after yourself in the process."

How to keep perspective

I love reading articles that inspire, that give tips or strategies on a certain topic and because of this - I've changed the vision for the Tassie Athlete slightly in this time.

I want each article, where appropriate, to offer readers something to takeaway and incorporate into their own training or lifestyle.

With this in mind, Maddy spent some time coming up with these tips on how to keep perspective in sport:

"I think to keep perspective, you need to think about where you want to be in the future."

"It's so easy to get caught up in this notion that 'you are your sport' or that your achievements somehow define you - they don't."

"All athletes, no matter what level of competition, we're all multi-faceted individuals with more to us than our sport. Keeping balance is so important."

"Social media and things like that mean we're constantly comparing ourselves to others, but I think it's really important to remember that it's your path, your experiences - it's your journey."

I caught up with Maddy and co-contributor Andrew in a cafe a few weeks after the first shoot for the Tassie Athlete.

Strangely, they both request their very specific, 'extra hot' coffees - but all the same it's great to chat with the group about things from design, to work, to study and to sport.

'Mads' tells us that she's still on that rebuilding journey, but that she's really happy now and will be racing again in the coming months.

Something that constantly resonates with me about this article, and about Maddy, is that while the one-percenters are important - there's something bigger, something external that plays a part to longevity in sport and long term success.

"For any young athlete, particularly a female - I think it's so important to have the guts to go against the grain."

"It's funny because I feel I can say that now."

"I know that, you'll have so many more experiences if you just do what you love. Push yourself hard, train hard but also enjoy and trust the process."

These are statements that speak more to an athlete's character, building a founding in life which sets you up for sport, rather than other way round which may not be sustainable.

It reminds me of a quote from one of my favourite movies, Without Limits.

Oregon coach (and eventual Nike founder) Bill Bowerman says to his track team "... if you can find meaning in the kind of running you have to do to stay on this team, chances are you will be able to find meaning in another absurd past-time: life."

I'm looking forward to seeing what the near future holds for Maddy, and thanks for being a part of the Tassie Athlete.

You can follow along with Maddy's journey at @mad_fas. 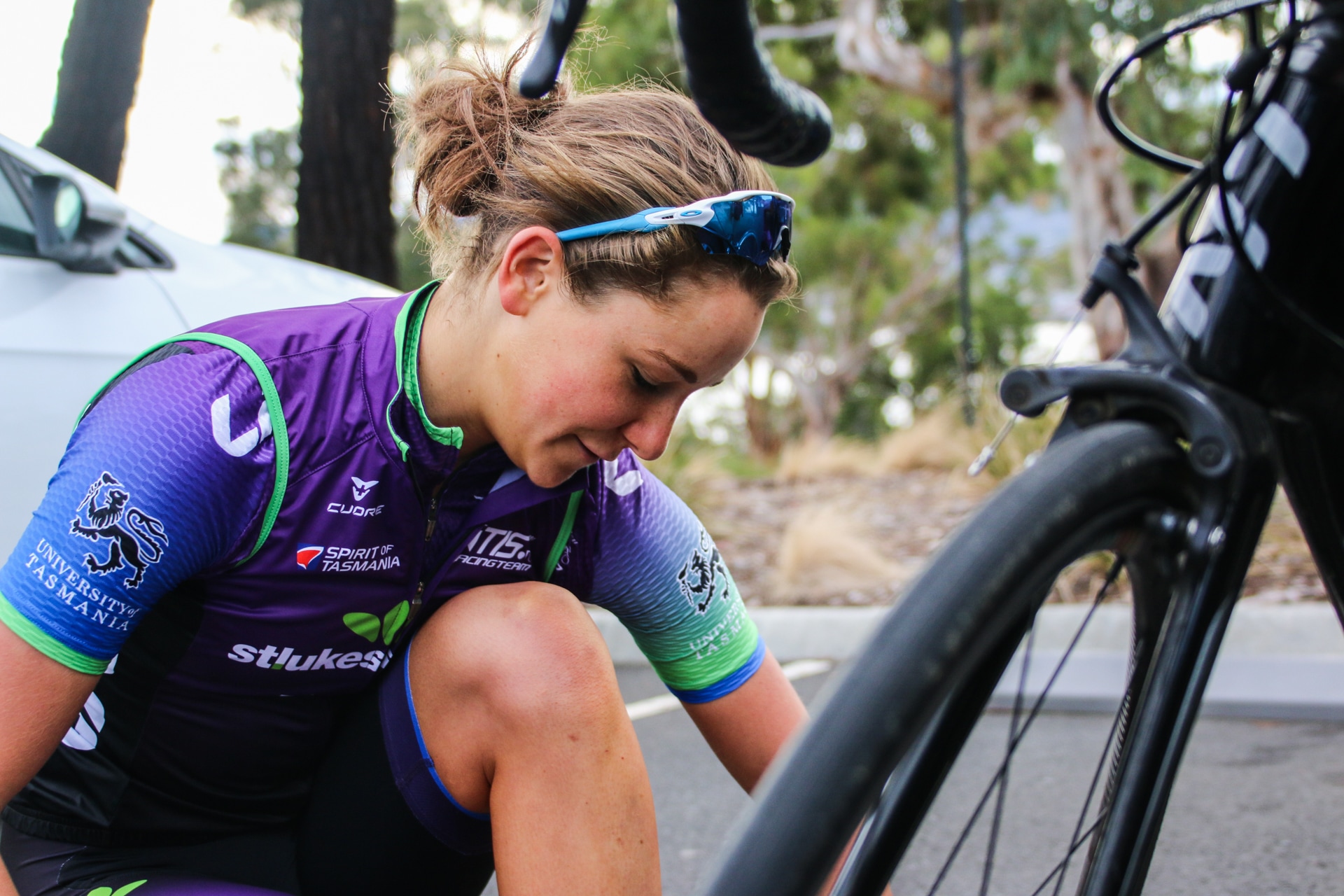 Some describe it as the worst crash they'd seen. Tasmanian mountain biker Izzy Flint shares her experience of concussion following a devastating accident overseas; and the real world implications of brain injury on her life beyond sport.

After some time overseas rediscovering her love for the sport, former Hockeyroo and Tasmania's Hockey One captain Amelia Spence shares her experience of moving back home and her love of the state.